An Ocean without Shore

In a previous post (“Excuse me, are you Homo duplex?”) I made an attempt to understand what Iqbal means when he distinguishes between the “appreciative self” and the “efficient self.”  I am now going to make a second attempt at clarifying those concepts.

The context of Iqbal’s discussion is the nature of time and the associated mysteries of freedom/determinism and permanence/change, a subject of vital importance to religion.  It may therefore be helpful to investigate the larger issues involved here before re-visiting the question of self.

Iqbal is convinced that the Qur’an does not teach predeterminism.  In fact, he insists that nothing can be farther removed from the spirit of the Qur’an than the idea that the future is entirely fixed, a notion that robs both God and the human spirit of their creative freedom.  Consequently, Iqbal finds unacceptable any theory or worldview that rejects the reality of time.  In the second chapter of his “Reconstruction,” Iqbal identifies this very issue as a problematic aspect in Einstein’s work.

. . . Einstein’s Relativity presents one great difficulty, i.e., the unreality of time.  A theory which takes time to be a kind of fourth dimension of space must, it seems, regard the future as something already given, as indubitably fixed as the past.  Time as a free creative movement has no meaning for the theory.  It does not pass.  Events do not happen; we simply meet them.

In Einstein’s theory of Relativity, time is said to be the fourth dimension of space; we do not actually experience time as a dimension of space because we are only three-dimensional beings trying to apprehend a fourth dimension.  In Iqbal’s words, Einstein’s theory seems to imply that “what appears to us three-dimensional beings as time is in reality an imperfectly sensed space-dimension.”  But if we accept this result of Einstein’s work and, so to say, if we spatialize time, then we would also have to accept that the future is as fixed as the past.  For Iqbal, this conclusion is unacceptable because it goes against the teachings of the Qur’an; furthermore, it also goes against the universal human experience of time that is completely free of any divisions. 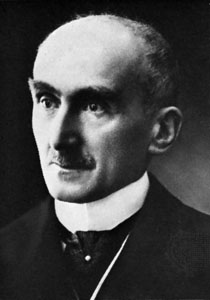 Accordint to Iqbal, the scientific –or, rather, mechanistic–view of time is perfectly acceptable if we are talking only about clock time, or serial time; it does not, however, do any amount of justice to the time as we actually experience it.  Iqbal turns to the French philosopher Henri Bergson as the only modern thinker who has recognized this problem and has attemtped to solve it, even though Iqbal finds Bergson’s solution relatively inadequate for his own purpose.  What Iqbal finds most useful in Bergosn is the latter’s view of “pure duration” as opposed to serial time.  Pure duration is the psychological experience of time which is unadulterated by space; the states of consciousness are devoid of any quantitative character, they tend to melt into each other, and there are no reversible moments as is the case with serial time.

It is in this context that Iqbal makes the disticntion between an “appreciative self” and an “efficient self.”  After quoting Bergson, Iqbal affirms that “there is nothing static in my inner life” and that “constant change . . .  is unthinkable without time.”  Consequently, we must accept that our existence as conscious beings implies a “life in time.”  But there is more to time than succession. To appreciate eternity, the timeless dimension of our experience, we need to notice that there is movement in our inner life, which is the movement of the self from the center and towards the periphery.

A keener insight into the nature of conscious experience, however, reveals that the self is its inner life moves from the center outwards.  It has, so to speak, two sides which may be described as appreciative and efficient.  On its efficient side it enters into relation with what we call the world of space.  The efficient self is the subject of associationist psychology -the practical self of daily life in its dealing with the external order of things which determine our passing states of consciousness and stamp on these states their own spatial feature of mutual isolation.  The self here lives outside itself as it were, and, while retaining its unity as a totality, discloses itself as nothing more than a series of specific and consequently numerable states.  The time in which the efficient self lives is, therefore, the time of which we predicate long and short.  It is hardly distinguishable from space.  We can conceive it only as a straight line composed of spatial points which are external to one another like so many stages in a journey.  But time thus regarded is not true time, according to Bergson.  Existence in spatialized time is spurious existence.

For Einstein, time is a dimension of space.  For Bergson, this is true only of serial time, not of pure duration.  Iqbal recognizes that humans live in both worlds, which leads him to acknowledge that the self has to be conceived as having two aspects or sides to it.  The efficient self lives and functions in the world of serial time; for all practical purposes, we assume that time is like a straight line with distinct segments labeled as past, present, and future.  If this was the entire story, however, there would be no creative freedom for the human spirit, nor for the divine creator.  That our creative freedom is real is evidenced by the experience of the appreciative self, which lives and functions in pure duration.

A deeper analysis of conscious experience reveals to us what I have called the appreciative side of the self.  With our absorption in the external order of things, necessitated by our present situation, it is extremely difficult to catch a glimpse of the appreciative self.  In our constant pursuit after external things we weave a kind of veil around the appreciative self which thus becomes completely alien to us.  It is only in the moments of profound meditation, when the efficient self is in abeyance, that we sink into our deeper self and reach the inner center of experience.  In the life-process of this deeper ego the states of consciousness melt into each other.  The unity of the appreciative ego is like the unity of the germ in which the experiences of its individual ancestors exist, not as a plurality, but as a unity in which every experience permeates the whole.  There is no numerical distinctness of states in the totality of the ego, the multiplicity of whose elements is, unlike that of the efficient self, wholly qualitative.  There is change and movement, but change and movement are indivisible; their elements interpenetrate and are wholly non-serial in character.  It appears that the time of the appreciative-self is a single “now” which the efficient self, in its traffic with the world of space, pulverizes into a series of “nows” like pearl beads in a thread.  Here is, then, pure duration unadulterated by space.

Pure duration is “unadulterated by space,” i.e., it is the realm of creative freedom.  Serial time can be measured in various ways, that is to say serial time can be quantified as collections of isolated instants.  The very sense of discreteness, of divisibility, of plurality, of a sharp and impenetrable wall between “me” and “you” is a hallmark of serial time, i.e., a hallmark of the efficient self.  On the other hand, pure duration is experienced as a single “now” in which states of consciousness merge and melt into each other; these states cannot be quantified, nor can they be imagined in terms of space-relations.  To put it differently, the efficient self is the realm of doing; the appreciative self is the realm of being.

The appreciative self emerges only “in the moments of profound meditation.”  It is characterized by a sense of wholeness, perfection, unity, and unlimited freedom; an ability to simultaneously accept and transcend the narrow confines of the efficient self; a capacity to dissolve all artificial boundaries that may hinder its progress.  Without this awareness of one’s reality as the appreciative self that abides in pure duration, one remains identified with the efficient self and suffers, as a result, the restrictive and limiting consequences of particular titles, labels, and categories.  We can recognize our real self in moments when we experience no limits to our being or to what we are capable of achieving; we can recognize the relatively spurious existence of the efficient self in serial time when we see ourselves in terms of narrow, mutually exclusive particularities with no hope of transcending them.  Perhaps it is this distinction that Iqbal had in mind when he composed the following couplet.

The self is an ocean without shore; too bad if you see it as a narrow stream.

4 Comments on “An Ocean without Shore”