A Recipe for World Peace

After accepting the Nobel Peace Prize in Oslo, President Barak Obama delivered a speech in which he attempted to justify his decision to escalate the war in Afghanistan. Then, on a more positive note, he presented his vision for achieving just and lasting peace in the world. He argued that we must work on three different fronts if we are to reach that Promised Land: (1) Use nonviolent means to discipline rogue nations; (2) Ensure respect for fundamental human rights; (3) Provide economic security and opportunity.

Basically, the President explained that if we can get these three ingredients and mix them together, the result will be wonderful, delicious peace. Unfortunately, there are a few problems with each of these ingredients, problems that President Obama did not discuss in his speech. But despair not! It turns out that the problems can be resolved.  In fact, if we look closely at each ingredient, it is possible to find the solutions to their problematic aspects with the help of some of the implications of Obama’s own words. Even though Obama himself did not explicitly mention these implications, all we have to do is to carry his line of thinking a little further! Let’s examine his three points one by one.

First, in dealing with those nations that break rules and laws, I believe that we must develop alternatives to violence that are tough enough to actually change behavior — for if we want a lasting peace, then the words of the international community must mean something. Those regimes that break the rules must be held accountable. Sanctions must exact a real price. Intransigence must be met with increased pressure — and such pressure exists only when the world stands together as one. 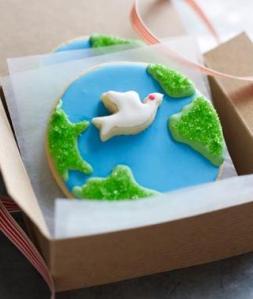 Yes!  Who could disagree with such an obvious prerequisite for building a just and peaceful world? No society can tolerate deviant or criminal behavior from one of its members without endangering its very integrity; the same holds true for the world as a whole. In the contemporary context, the voice of the international community can be heard loud and clear in the chambers of the United Nations and its affiliated organizations. Regimes that violate the consensus of the international community are obviously endangering world’s peace; there has to be a mechanism for holding them accountable for breaking the rules, and, in the interest of peace, that mechanism must not involve bombing and destruction.

If we were to raise these problems in front of President Obama, what would he say? Of course, he would not say that powerful nations ought to enjoy an exemption from the rules and laws that everyone else is required to follow; nor would he say that it is fair to make rules that favor some against the other. Americans have a long history of resisting such brazen violations of fairplay in their own legislative and judicial systems; one would expect that they would never allow such violations to become acceptable norms in the international system either. Consequently, Obama would agree that the world needs fool-proof mechanisms to prevent such injustices, similar to the checks and balances that have been placed in the American systems of government and law. Obama is, after all, a trained lawyer himself; he not only understands the importance of justice but he is also well aware of the many ways in which justice can be bypassed or corrupted by the rich and the powerful.

The solution, then, is obvious: the United Nations must be reorganized so that mutually agreed-upon principles, rules of conduct, and moral standards are always upheld, even — and especially — when they go against the wishes of the powerful. This, in turn, requires that all nations accept equality before the law and agree to follow the international consensus. Violators will face nonviolent punishment commensurate with their crimes, and they will be strictly prohibited from using their economic, military, or diplomatic power to avoid their just penalties.

On the relationship between peace and human rights, Obama said:

This brings me to a second point — the nature of the peace that we seek.  For peace is not merely the absence of visible conflict. Only a just peace based on the inherent rights and dignity of every individual can truly be lasting.  . . . .  I believe that peace is unstable where citizens are denied the right to speak freely or worship as they please; choose their own leaders or assemble without fear. Pent-up grievances fester, and the suppression of tribal and religious identity can lead to violence.

Again, the President is absolutely correct. Violence erupts when people’s basic needs are not met for a long time. When we work to ensure that everyone is able to meet their basic needs and secure their fundamental human rights, we are, in effect, working for peace. The absence of overt conflict is merely “negative peace.” On the other hand, “positive peace” is characterized by a state of justice and fairness.  We can establish “negative peace” through violence or threats of violence, but such a peace is precarious and unstable; it has no foundation to stand upon and so it does not last very long. The peace that lasts is always the result of social and political justice; people are unlikely to resort to violence if no one denies their rights and no one stops them from fulfilling their needs.

Again, there are a few problems. What happens when the interests of a particular nation are in conflict with the needs and rights of another nation or group of people? What if one nation believes that it has a right to self-determination, but another, more powerful, nation refuses to cooperate on the grounds that this would violate its own interests? What if a particular regime is known to violate the human rights of its own population, but the continuation of this regime’s rule happens to be in the interest of another, more powerful nation? What if the interests of a particular nation are such that they require the uprooting of indigenous communities all over the world or the exploitation of children half way across the globe or the irreversible destruction of the natural environment?

If we were to raise these problems in front of President Obama, what would he say?  Obviously, he would not say that the interests of a particular regime can trump the basic needs and rights of a people; nor would he say that the stock value of a corporation can have more worth than the life-style of an indigenous community, nor that the Dow Jones has a greater right to protection than the need of a far away people to enjoy clean air and drinkable water. Obama would also reject the notion that it is fair to destroy the world’s climate for the sake of some abstraction called “economic growth.” Instead, Obama is most likely to agree that all the nations of the world must submit to the principle that human rights take precedence over the interests of any state or corporation. If a nation violates this principle, it ought to be held accountable at the international level and forced to pay reparations or suffer appropriate penalties.

Finally, Obama made his point about economic security:

Third, a just peace includes not only civil and political rights — it must encompass economic security and opportunity. For true peace is not just freedom from fear, but freedom from want.

How true!  It is impossible to have a just and lasting peace in the world if the economic needs of large number of people are not being met, or if large number of people are living under constant anxiety about their financial future, or, worse, if they don’t even know whether they would have anything to eat tomorrow. In the absence of economic security, people are likely to feel that they have nothing to lose, they have nothing to hope for, and they have no personal stake in the society and its structures. Such a mindset can easily breed violence. Similarly, if people do not experience at least some fairness in term of economic opportunities, they are also likely to turn towards violence. A society that does not provide more or less equal economic opportunities to all its members would inevitably create classes of extremely rich and extremely poor, a situation that would lead to resentment, anger, and frustrations . . . and therefore violence. A fair and equitable distribution of wealth is an essential prerequisite for world peace.

Let’s look at the problems associated with this statement. What happens if certain societies are prevented by external forces to provide economic security to their members? What if the economic prosperity of some societies result directly from the economic exploitation of other societies? What if the level of economic opportunity enjoyed by a certain proportion of humankind requires that the same level of opportunities be denied to the rest of the world? What if the style of consumption in some societies is such that it necessitates stealing the life chances of a significant part of humanity? What if the resulting anguish and violence does not remain confined at the local level but spills over into the global arena? What if all the people of the world start demanding the same quality of economic security and the same opportunities for economic development as enjoyed by the richest of the rich? What if the planet cannot provide sufficient natural resources to meet such a demand?

How would Obama respond if we were to raise problems like these? Having already admitted that peace results at least partly from economic security and opportunity, he cannot say that large proportions of the world’s population can be kept in abject poverty or even in relative deprivation without such a situation causing serious threats to world peace. He would also understand that the rate of consumption characteristic of the industrialized West, particularly the United States, is so high that it is simply incapable of being universalized. Currently, the oil consumption in the United States is about 24.8 barrels per day per person; it is about 1.9 barrels in China and 0.8 barrels in India. If the Chinese and the Indians start demanding the same level of economic security and opportunity as that of the United States, it is doubtful if the earth would be able to spit out enough black gold to quench their thirst. Obama would understand that since the standard of consumption cannot be elevated to the same level for the entire human population, the only way to ensure a more or less equitable distribution of economic goods would be for the richest of the rich to accept a considerably lower level of consumption. As Gandhi is reported to have said, live simply so that others may simply live.

There you have it.  Obama’s three-point agenda for achieving a just and lasting peace! The plan demands that the United States take a leadership role in order to: (1) Make the United Nations truly effective by establishing de facto equality for all the member states; (2) Establish the principle of zero tolerance for human rights violations; (3) Reduce the standard of living in rich countries and raise it in poor countries until they meet at a sustainable middle.

Of course, it would be foolish to expect such things from the US President. Despite the rumors, Obama is no Messiah. But it does go to his credit that he has, at least, given us the recipe for world peace. Better yet, he has given us his own standards on which his administration’s conduct will be judged.

← The Rules of War
Learning Time Management from Nature →