Quarreling over Names and Shapes

In his Masnavi, the Sufi poet Jalal al-Din Rumi articulates the latter point by narrating two stories, “Quarreling over Names” and “Quarreling over Shapes.” The first story explains how the same reality can be described by means of a wide variety of names; the second story emphasizes how knowledge of a part of reality, no matter how accurate, does not easily translate into knowledge of the whole.

Here is Nicholson’s translation of the first story, “Quarreling over Names.”

Pass beyond (external) names and look at the (underlying) qualities,so that the qualities may show you the way to the essence.

The opposition (among) people takes place because of names. Peace occurs when they go to the real meaning.

The argument of four persons over grapes, which each one had understood by a different name;

A man gave four persons a silver coin. The (first) one (who was a Persian) said, “I will give this for (buying) some angur.”

The (fourth) one, an Anatolian Greek, said, “Quit (all) this talk!  I want istafil.”

In (their) disagreement, those individuals were (soon) in a fight — since they were uninformed of the hidden (meaning) of the names.

They were striking at each other (with their) fists out of ignorance.  They were full of foolishness and (were) devoid of knowledge.

This is a delightful, yet somewhat poignant, story. The narrative makes it clear that angur, ‘inab, umuz, and istafil are merely four different words in the Persian, Arabic, Turkish, and Greek languages, all of which denote the same reality (grapes). Listening to Rumi’s poetic description of the conflict, we are tempted to laugh at the four characters in the story and their silly behavior. Our laughter is soon turned into serious introspection as we realize that the story is describing an important aspect of the human condition, a predicament that each of us faces by virtue of being human. 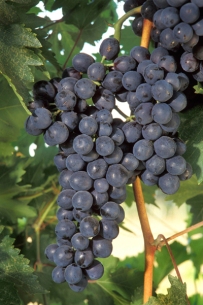 Our disagreements can sometimes lead to heated arguments that may escalate into fist-fights and even bombing campaigns. And yet, many of our disagreements are too shallow to warrant anything more than a smile. We disagree over words while ignoring that words are merely the vehicles for meanings. We routinely take our mental positions, our doctrines and our dogmas, with a seriousness they don’t deserve. We fight over superficial differences, such as words and phrases, while forgetting that there is a single reality underlying our varying interpretations. Just because that single reality is susceptible to a wide range of descriptions does not mean that our words and phrases are worth fighting over, or that our disagreements are permanent or essential.

Ruth Bebermyer says, in one of her poems, that “words are windows, or they are walls.” The purpose of language is communication, but our language often becomes the biggest obstacle that prevents us from communicating.  We’ve all experienced the situation in which words fail to carry the meanings that we wish them to convey, and when the more words we use the more convoluted the situation becomes. This happens, partly, because we tend to overestimate the power of language. Somehow, we have forgotten that experience is more basic, and therefore more important, than the words we use. Language is a great tool, but it has its limits. Our vocabulary, no matter how large, is no match for the range and richness of our actual experiences.

So long as all parties in a given context understand what they are referring to, it makes absolutely no difference exactly which words they use to describe it; or, indeed, whether they speak at all. On the other hand, when our actual experience of reality is inadequate, or when we put too much trust in the ability of language to convey our meanings, then we easily fall into disagreements over such superficial matters as names and labels.

For Rumi, the conflict over interpretations can only be resolved when someone with a deeper insight helps us notice the shallowness of our disagreements and the true nature of reality. As soon as we see and taste the actual grapes, the conflict disappears. We realize that it doesn’t matter whether we call the object of our desire angur, ‘inab, umuz, istafil, or something else. This need for personal experience calls for a spiritual guide, someone who knows the different languages and can therefore appreciate the underlying cause of our predicament, someone who can see through the names and labels, someone who understands what all of these words are intended to signify.

Rumi’s second story is rather well-known, but is no less delightful or profound than the one about grapes.

The disagreeing over the qualities and shape of the elephant;

(An) elephant was in a dark building.

(Some) people from India had brought it for exhibition.

Many people kept going into that dark (place) in order to see it.

Each one was stroking it (with his) hands in the dark, since seeing it with the eyes was not possible.

In the case of one person, (whose) hand landed on the trunk, he said, “This being is like a drain pipe.”

For (another) one, (whose) hand reached its ear, to him it seemed like a kind of fan.

As for (another) person, (whose) hand was upon its leg, he said, “I perceived the shape of the elephant (to be) like a pillar.”

(And) in the case of (another) one, (who) placed (his) hand upon its back, he said, “Indeed, this elephant was like a throne.”

In the same way as this, any one who reached a part (of the elephant) used his understanding (in regard to) any (particular) place he perceived (by touch).

Their words were different and opposing because of the (different) viewing places.

If there had been a candle in the hand of each person, the disagreement would have gone out (completely) from their speech.

The eye of (physical) sense is like the palm of the hand, nothing more.

(And) the palm (of the hand) has no access the whole of (the elephant).

In this narrative, a number of individuals go inside a dark room where an imported animal is being kept, a creature they have never encountered before. The individuals are supposed to touch and feel the body of the animal, and thereby form some kind of image in their minds as to how the beast looks like. The story brings out a whole range of disagreements among those who have felt some part of the creature and, on the basis of this limited experience, feel perfectly confident to make judgments about the whole. 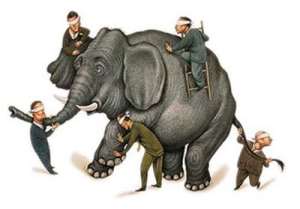 In the story of the grapes, the four men are able to resolve their disagreement when they are presented with a bowl of grapes. The actual experience of seeing and tasting the fruit makes them realize that all of them had exactly the same desire, and that their problem stemmed from the fact that they were expressing their desire in different words. The situation in the story of the elephant is slightly different. Here, a number of individuals are disagreeing over how this exotic creature looks like, based on their differing perceptions generated by their experience of touching and feeling different parts of the animal’s body. If the story of the grapes brings out the limitations of language, the story of the elephant is designed to emphasize the limitations of sense perception. While each individual is absolutely correct in describing a particular part of the creature, the epistemological shortcoming lies in their assumption that knowing a part of a given reality is identical with knowing the totality of that reality.

For Rumi, the disagreement could be resolved if each person was given a candle. While sense perception (exemplified by the faculty of touch) gives us accurate but limited information, it is possible to supplement that information by means of a source of insight (exemplified by the candle) into the nature of the whole of reality, so that we may come to perceive it in its fullness or totality.

The story of the elephant can be read as an allegory for the nature of science. While science can give us more or less accurate information about a given strip of reality, it would be a mistake to assume that this strategy of dividing reality into tiny fragments and studying it as isolated pieces can help us see how reality as a whole looks like. The individuals who judged the shape of the elephant based on what they knew about the shapes of its parts were using an analytical method. This is good and useful as far as it goes, but some form of illumination or enlightenment is needed if we are to employ a synthetic method in order appreciate the wholeness of reality as well.

The religious implications of this story are intriguing, to say the least. 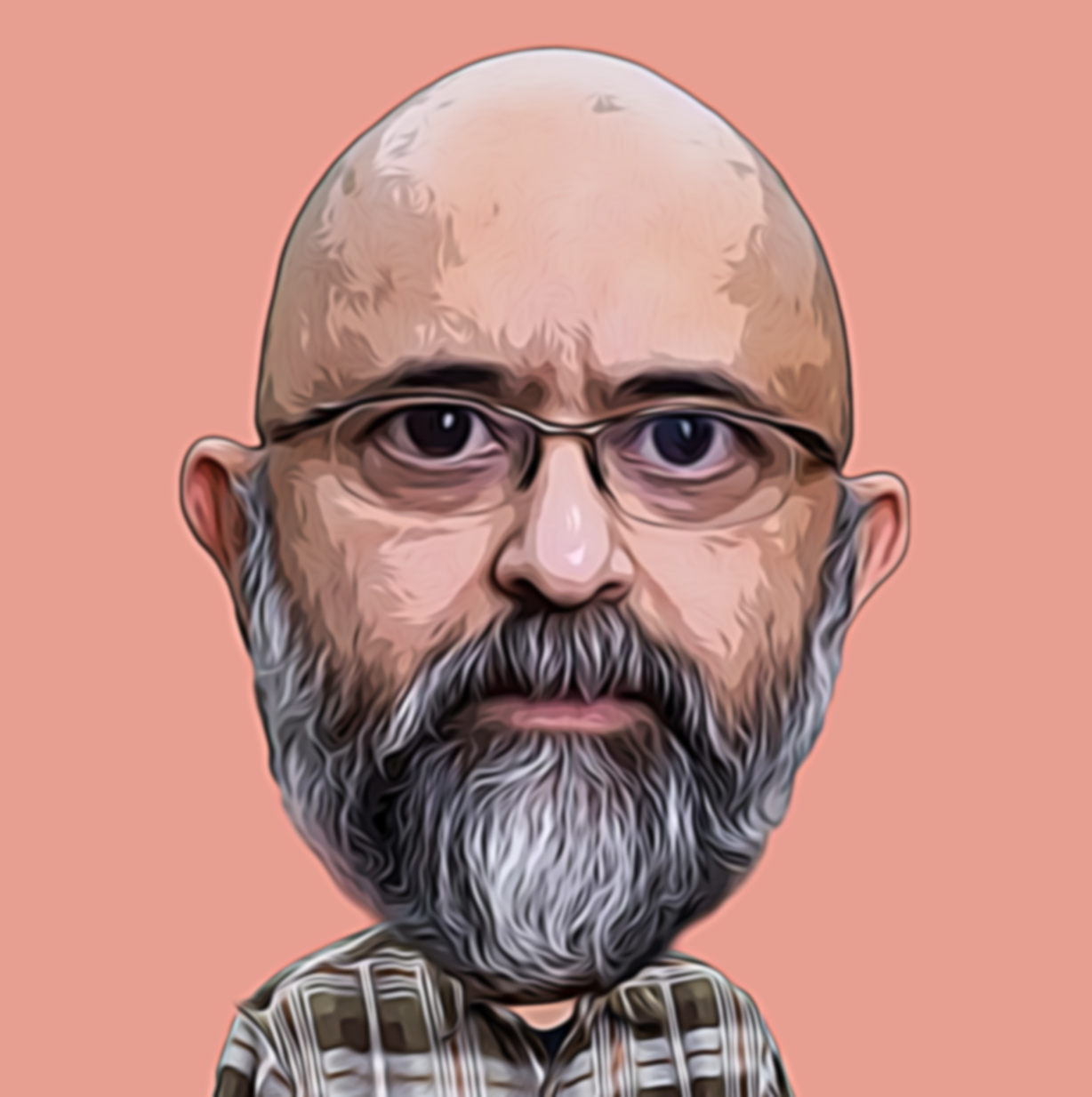